Commercial Drive also known as The Drive is a roadway in East Vancouver.  A culturally rich and authentic neighbourhood.   It runs from the south shore of Burrard Inlet south to 16th Avenue.

The History of “The Drive” 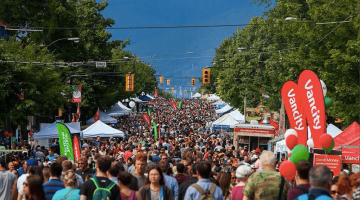 The Drive has come a long way from when it was originally a skid road for dragging logs to the harbour.  It was named “Park Drive” but renamed “Commercial Drive” in 1911.   At one time there were a few speculators who wanted to build a neighbourhood similar to the West End and Shaughnessy Heights.   The global economic collapse of 1913 ended their dream.   During the 1920s Commercial Drive was a prosperous suburb, but declined during the Great Depression and never recovered until World War II.   The result was a number of historical buildings and residences were built in the area. Commercial Drive was originally closer to the centre of town—the town was then located at Main and Hastings not where it is located today.  Throughout the 1980s, The Drive attracted a large counter-culture demographic, including political activists, lesbians, hippies, punks, and artists.  Gentrification also came to the district with new condominium housing projects and new storefronts replacing old wood-frame stores.  Today the upper Drive at Broadway has turned into the city’s busiest crossroad with the second SkyTrain or Millennium Line.   Today Commercial Drive is a multicultural and urban area.

Contact us for more information and to see what is available in this neighbourhood.

BUYING OR SELLING A HOME IN EAST VAN?

We can sell your home in East Vancouver! Our skill, experience, and technology will get you the highest possible price quickly. Or, call us for help locating your new dream East Van house, townhouse or condo.

Call Us Today!
Back To Top